Curators
FREE Nigerian Business Directory
✅ NEW - get your business listed and your information shared across social media.
Ad
Unknown gunmen suspected to be militants, on Sunday blew up a pipeline in Delta State.

The pipeline is operated by the Nigerian Petroleum Development Company, NPDC in Delta State. 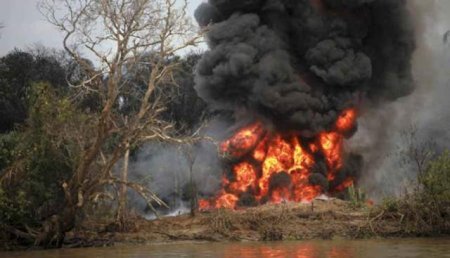 However, no separatist group from the oil rich region has claimed responsibility for the attack.

The attack was confirmed to vanguard by the Ughelli South council Chairman, Mr Paul Etaga.

Etaga said the pipeline popularly known as Abura line, was bombed at about 7:30am on Sunday morning.

Etaga disclosed that he visited the site of the incident in company of the Commanding Officer 222 battalion, Agbaraha-Otor, Lt. Col U. S Abdulsalam, the Ughelli South Division Police Officer, Oghenedoro Samuel and heads of other security agencies in the area visited the scene of the blast.

According to Etaga, the inferno from the blast has been curtailed by fire fighters drafted from the Otor-ogun Gas plant in Ughelli South.

He said, “Though no arrest has been made, the security agencies are currently investigating the incident and are on the heels of the perpetrators so as to bring them to book.”
You must log in or register to reply here.

K
Metro Militants Blow Up Another Pipeline in Delta