FREE Nigerian Business Directory
✅ NEW - get your business listed and your information shared across social media.
Ad
Ossy Ibori, suspected leader of the militant group terrorizing Ishawo and neighbouring creeks has been killed. 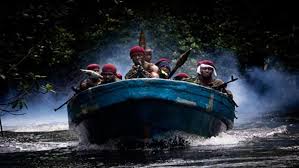 Ibori was gunned down around 3am, at Ajakpa in Ondo State, when he led his gang in an attack of military men deployed to safeguard the area. Other members of his gang escaped.

According to THE NATION, another account of his death said Ibori was lured out of Ishawo creek to Ajakpa wirh the help of his lover, where the soldiers eventually trailed him to.

I thought it was James Ibory.
S

Lol. I thought it's James ibori

Nov 11, 2016
LequteMan
L
A
Politics How James Ibori Can Save The Niger Delta and Nigeria

Feb 10, 2017
abujagirl
A
P
Politics James Ibori: 9 Facts About His Trial And Conviction In UK