Kcee, flamboyant singer and MTN brand ambassador has come under immense mockery for his dressing and claim of being a fashion icon.

Kcee recently posted a picture of himself striking a pose with his red coloured Mercedes G Wagon with the caption: "Am I not the fashion icon? Oya say something @officiallindaikeji #FASHIONICON #fivestarmansion #OGARANYA #OGADINMA #GOODBOYFRIEND #KCEELIMPOPO."
This was met with mixed reactions from music fans but an overwhelming majority slammed the singer's claim and urged him to embrace a more mature dress sense.

"This guy needs prayers. In his mind, he's Michael Jackson abi?" asked an anonymous source. Musa Isa also said, "I swear he needs prayers."
Another music fan, Toronto finest said, "Childish style... A grown up man doesn't dress this way. Doesn't this local breed see D'banj and Darey?"
"Why does he always call himself a good boyfriend? I thought he was married?" Juliet Onyii asked.
Straffmore also had a few words for Kcee, "Mr. Kcee I know you're going to see this so here goes... I don't blame you because the transformation from poverty to wealth is mountainous. Gone are the days where you can just wake up and jump into any outfit you think suites you. You're a public figure now and they'll gnaw at you with scrutiny at any slight mess-up. Here's my advice; hire a stylist. God bless." 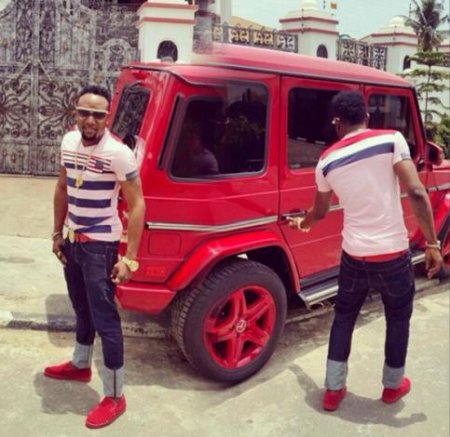