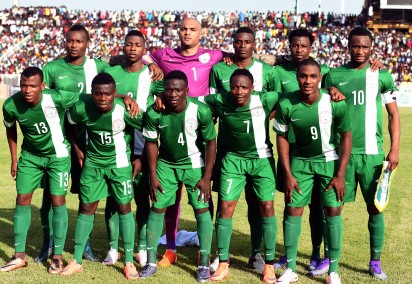 According to the list, Rohr appears to stick to his trusted defensive line of Carl Ikeme in goal, Kenneth Omeruo at right-back, Leon Balogun and William Troost Ekong partnering in the heart of the defence while Elderson Echiejile will start at left-back.

In the midfield, Ogenyi Onazi, Wilfred Ndidi and Oghenekaro Etebo are expected to feature prominently; while in the line of attack, Kelechi Iheanacho and Alex Iwobi will play up front while it remains to be seen if Ahmed Musa who failed to start the last three games under Gernot Rohr will get the nod ahead of Moses Simon.

All of Rohr’s new call-ups will be handed substitute role; and they are; Tyronne Ebuehi, Noah Bazee, Kayode Olanrewaju and Isaac Success.

The match is scheduled to kick off at 8pm (9pm Nigerian time) today.

Meanwhile, the Super Eagles have proposed to the organizers of tonight’s international friendly against Senegal that they would like to wear black arm bands and observe a minute of silence for the victims of the Westminster attack in London on Wednesday.

A tweet on the official handle of the Super Eagles stated: “We’ve proposed to organizers of today’s friendly vs Senegal, that our players wear black bands & observe a minute silence for #Westminster,”


The starting line up: