World Nigerian Expert Calls For An End To Nuclear War

A Nigerian expert, the Co-President of 'International Physicians for the Prevention of Nuclear War' (IPPNW), a consortium of doctors which won Nobel Peace Prize in 1985 Dr Daniel Etim Bassey in Patna during the National Conference of Indian Doctors For Peace and Development early in March, spoke about the prevention of Nuclear War and small arms race.

Dr. Bassey has been quite vocal against small arms even in Nigeria through an outreach peace radio program.

The Nigerian Expert in an interview with India Times discussed extensively about the effects of nuclear war between India and Pakistan and the aftermath.

He said: “during Nuclear a war an estimated 20 million deaths would take place. No nation in this world, forget countries like India and Pakistan, is medically equipped to tackle the aftermath of such a war. Therefore, it is high time doctors in these two nations raised their voice against nuclear armament”. 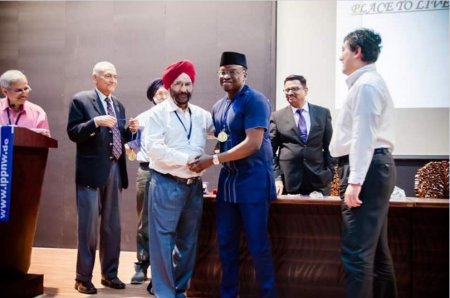 “Simply put, all the doctors and hospitals would be destroyed. Who will then take care of the injured? At least 44 million people would receive grievous injuries. Thousands others would suffer from other injuries”.

He stated further that: “It is scientifically proven that the environment post nuclear explosion no longer remains favourable for farming. For a country like india and Nigeria which is home to the highest number of malnourished children in the world, this should sound as an alarming bell. Hunger makes our immune system weak which leads to epidemic of infectious diseases”.

Dr. Bassey through the IPPNW, therefore, calls for free healthcare accessibility to one and all, and the best way to do that is to create hospitals and develop manpower. Some of the best doctors in different parts of world are from Nigeria.

“Our country must contemplate stopping this brain drain”, he advised.

May 28, 2020
ese
E
E
Entertainment Funke Akindele Calls For An End To Flogging Of Students In Schools – Naijaloaded |...