Nigerian 'Macron': No We Can't, For Now!

Macron’s victory in the French polls was a rude awakening for young Nigerians who had become accustomed to dusting the shoes of the country’s most powerful men. With Macron’s victory, young people in Nigeria suddenly realized they should be doing more than carrying briefcases, trolling political opponents and defending the indefensible actions of the ageing political elite. 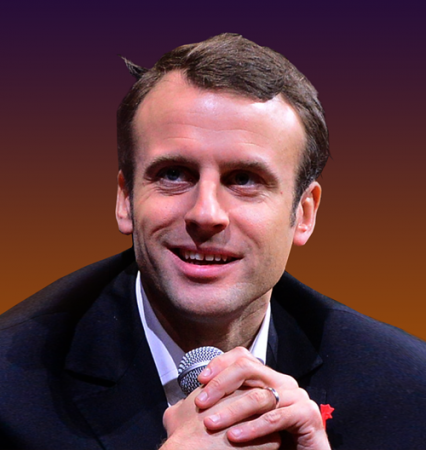 “We should be leaders of today, not waiting for tomorrow,’’ many postulated.

So many questions were raised by young Nigerians after Macron’s victory, the most dominant being – “Can Nigeria Have A Macron?’’ “Is a young leader the answer to Nigeria’s woes?’’

Nigeria, like several other African countries is run by an ageing elite. These ageing elites comprise of recycled leaders who refuse to vacate the political scene for emerging younger leaders.

In Nigeria, young people under 30 account for nearly 60 percent of the population. Worldometers peg the median age of the Nigerian population at 18 years, whereas Nigeria is currently governed by a 74-year old grandfather.

WHY NIGERIA CANNOT HAVE A MACRON

Constitutionally, Nigeria cannot have a Macron. However, we most certainly can have a leader who is just one year older than Macron. The 1999 constitution prescribes that for qualification into the office of President, a candidate must be 40 years and above.

‘’ 131. A person shall be qualified for election to the office of the President if -

(a) he is a citizen of Nigeria by birth;

(b) he has attained the age of forty years; ‘’ – NIGERIAN CONSTITUTION

There has been moves to amend that section of the 1999 constitution; nonetheless, until that is done, Nigeria will never have a President under 40 years of age.

Nigerian politics thrives on hooliganism and mass bribery. Unlike the political landscape in France, where every candidate comes with their ideals, Nigerian politics is every man and his goons. Those calling for radical political change in Nigeria often meet their maker a tad too early. Remember the deaths of Dipo Dina [DD Direct] and Professor Ayo Daramola?

If you survive the violence, another major barrier is funding. Political campaigns here are very expensive. Laws on campaign funding in Nigeria are shoddy. As a result, politics is exceptionally difficult as voters are expecting noodles, bar soaps, rice and cash in exchange for their votes. A lot of Nigerian voters, especially those in rural areas do not care about campaign promises. The only thing that matters to such voters is how you can fill their stomach.

A Macron in Nigeria may not even be able to raise money for his nomination form. He may be forced to toe in the steps of President Muhammadu Buhari and obtain a bank loan. What if he doesn’t have a farm and cows for collateral? What if all he has is a burning desire to change Nigeria?

Often times, the only way to get funded is to collect funds from same corrupt politicians, whose cronies you’re trying to retire.

In Nigeria, citizens don’t grow up fast enough. The system is designed to retain the citizens as babies until old age approaches. Macron was done with his education and already had a career before he turned 30. At 24/25, a lot of Nigerian youths are still struggling to get into tertiary institutions and are very heavily dependent on parental support. Those who manage to get an education early enough are often stuck in low paying jobs for a long time.

It’s also difficult for the average Nigerian youth to get quality political experience required for the top job. Youths here are expected to be social media warriors or thugs for the ageing political class. They are expected to spend their youth on social network and in television stations defending their aged principals.

WHY YOUTH MAY NOT BE THE ANSWER

Before Democracy, most of Nigeria’s military Heads of state were fairly young. Yakubu Gowon was Military Head of State at 32, General Murtala Mohammed at 37 and Olusegun Obasanjo at 39. Muhammadu Buhari and a few of the others were in their very early 40s, however, these men all contributed to the destruction of Nigeria. They redefined the meaning of ‘Nigerian youth’ and have since remained kingmakers.

The Nigerian education sector, which once attracted international students, is now in shambles, patronized only by the poorest in society. Nigerians were previously welcomed everywhere, but the country’s reputation has now diminished. Nearly every sector of Nigeria witnessed a downturn when run by men who were supposed to our Macron.

The Nigerian constitution may not support a Macron President, but it permits such at other levels of government. Constitutionally, at 35 years and above, one can vie for the office of governors and senate, as well as House of Representatives and state Houses of Assembly at 25 years and above.

We have all seen each of the politicians listed above behave like the older politicians. Their actions were enough to cement the popular quote, “age is just a number’’ in the minds of Nigerians. The value of lives in their states and constituencies didn’t improve. Nearly all the above-listed politicians were involved in one major corruption scandal or the other. They considered the opportunity given to them to serve, a chance to build up their reserves and cement their position in the club of political elites. They treated public service like a get-rich venture.

A look at the Students’ Union Government [SUG] in Nigerian tertiary institutions, further reminds one that young Nigerians are not the answer. Just like the Nigerian government, SUGs are plagued with tales of abuse of power, corruption and daylight robberies. SUGs are all about quick money; this same attitude is what they take into higher political offices.

Contrary to popular beliefs, Macron is an establishment kid, not a ‘nobody’ - oops! Did I break your heart? His parents may not have held political office, but he was raised in all the fine ways and privileges of the establishment. He was also a part of the Socialist party for a very long time. Most Nigerian youths who are currently close to corridors of powers are likely thieving ex-student union leaders, offspring of the same politicians who ruined Nigeria.

More youth participation in Nigerian politics will definitely see to a rise in established kids taking power. In a society without sufficient checks and balances, how different will they be from their parents?
Last edited: May 13, 2017

The youths may desire change but like to comfort selves in remaining in status quo. You" ll hear, "the worst democracy is better than the best military rules", "looters are innocent until proven guilty" and..

Whereas the constitution and other laws were not passed with the hindsight that the Nigeria society will develop - no not on linear progression and that our moral value will fall - to an ever low in human history- that leader have no ethical obligations towards citizens suffering and other societal evils.

We need more of political reforms else there will be no giant stride in any of our legal, social and economic reforms.
P

In my generation, I see teaming with young, sharp and futuristic dreams. These dreams are shape by social-cultural and political space that has been doctrinal with the old mindsets. I like the constitutional angle, in as much as we are still operating a constitution deliberated and delivered to us by Military leaders, old men and women within the corridor of power. Not only will the youths be unable to take the bull of power by the horn, they will be unable to achieve tidings with a political power.

A good number of traditional African societies have had cases of abuses of power and privilege that have been recorded in history. They insist it's tradition, or the king and kingmakers are unquestionable. To mention names would be to court uproar, so let's leave that. Abduction of citizens and slaves from 'enemy' territory for slavery, marriage or diabolic ends by kings and chiefs; shocking activities of cults, snatching of other people's lands, wives, children and property and some other ear-aching incidents have been reported in the past and not surprisingly, these privileged abuses have stubbornly been handed down to the participants of the modern day political system all over Africa. Cults are controlling the political system here in Nigeria, period. Not seriously pursuing any rules of justice and truth, hence rampant corruption. Nevertheless, youths need persistence and wisdom to deal with the cheating elders. While we appear to patronize their terror squad, we can still edge them out, though it will be a slow process. Let's change our mentality first by preaching the ethical values we want among ourselves and spreading these ideals, continue gathering a good following in all spheres of Nigerian life and business, and look for every opportunity to 'axe' and weaken the supposed elite with a broad patronising smile. It's not impossible.
A

RemmyAlex said:
In my generation, I see teaming with young, sharp and futuristic dreams. These dreams are shape by social-cultural and political space that has been doctrinal with the old mindsets. I like the constitutional angle, in as much as we are still operating a constitution deliberated and delivered to us by Military leaders, old men and women within the corridor of power. Not only will the youths be unable to take the bull of power by the horn, they will be unable to achieve tidings with a political power.
Click to expand...

I agree with you that our constitution must be rewritten, but by who ? The thieves in the National assembly ? I have long stopped nursing hope for a better Nigeria
P

Jules said:
i don't think age is the problem. In Fashola's words - ''The problem is not their age. It’s the age of their ideas.” I do not believe your generation will do better, i think your generation will be worse. Just like the old leaders, youths of today seem to have no governing ideology.

I agree with you that our constitution must be rewritten, but by who ? The thieves in the National assembly ? I have long stopped nursing hope for a better Nigeria
Click to expand...

I disagree with Fash. He always have ways of using words to suit himself.

On the overhauling of the constitution, the thieves too, can do it, with maximum supervision from the office of the citizen.

Let's say, Nigeria is the case of 'a child should not be caned to death because he is errant' (common Yoruba proverb). We must keep hoping, keep praying, and keep pushing for reforms, in spite of the bad eggs in power and their 'offspring'. And of course it has nothing to do with age, I insist it is a system of cults we are dealing with in Nigerian governance, and it may take time and wisdom to remove this cult system. Besides rewriting the Constitution (by the same people?) we need people both young and old to convince them, challenge them, goad them to respect the rights of the average Nigerian citizen who elected them in office. Persistence and wisdom. God help us.

YES, i love that , the change begins with us. every one is complaining of Buhari being the cause of the problem when the problem lies within us , we all need to work on ourselves in other to create a better tomorrow. Imagine, the prices of things sold in the market this day you cant even lay your hand to buy anything worthwhile, in short we are eating money and not food. Greedy business men and women now now double the price of buying anything and when you ask they blame all that on buhari as in "changes" meanwhile this change begins with us.