For Sale - One Bedroom Executive Flat - Lagos (NGN37m)
✅ NEW - car park, swimming pool, 24 hours light/security and more.
Ad
The Chairman, Senate Committee on Defence, Senator George Sekibo,on Wednesday said that the senate was not under pressure to intervene to save the lives of 12 soldiers sentenced to death by a military panel for mutiny.

"No we are not (under pressure) because the Armed Forces is established by an Act of the National Assembly. The Act spelt out categorically the conduct of soldiers and the way they are to behave wherever they are.

"If you join the military that Act is to guide you and your conduct. If you go contrary to any of the prescribed sections of the Act the punishment prescribed for the Act you violated will come on you.

"So the military did not just wake up one day and say that they are going to kill Mr A or Mr B.They (military) went through the necessary processes and they found them guilty",he said.

The committee chairman, however said that those found guilty could go on appeal and the rulings from the appeal would be binding on them.

"But for what the military has done, they have done the best thing because you must instil discipline in the Armed Forces. f you don’t do so one day all of us here will be sacked and you will not hear of this place again",he said.

Sekibo called on Nigerians to encourage the military to ensure that it discharged its duties effectively.

12 Nigerian soldiers were on September 16, sentenced to death for mutiny after firing shots at their commanding officer in Maiduguri on May 14.

A nine-member military tribunal, sitting in Abuja, convicted the soldiers following shots fired at the Commanding Officer of the Nigerian Army’s 7th Division, Maj.-Gen. Abubakar Mohammed. Court president Brig.-Gen. Chukwuemeka Okonkwo said the sentences were subject to confirmation by Nigeria’s military authorities but added there was no doubt about the gravity of the offence. 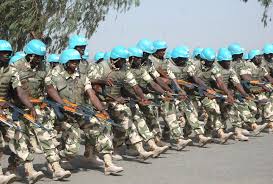 Nov 10, 2020
jade
J
E
World The families of U.S. soldiers in the Middle East will spend their days waiting for death of their children' - Daughter of slain Iranian general vows -

World Mother And Son Get 12-Year Jail Term For Duping American Of $82,570 – Nairaland