Nigerians are angered over the Cable News Network (CNN) omitting the country’s name in the headline report announcing the visit of Facebook founder, Mark Zuckerberg, to Africa’s most populous country.

The Facebook founder visited Lagos, Nigeria’s commercial capital, on Tuesday, and interacted with Nigerian tech entrepreneurs at Yaba, regarded as the Silicon Valley of Nigeria.

Read What Nigerians Are saying: 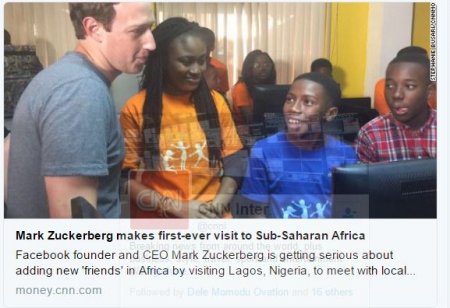 We have to earn the respect!

I think what CNN has done is lazy but I do not think they will be losing any sleep over the error... you will keep seeing adverts from our banks and telcos.
Show hidden low quality content