FREE Nigerian Business Directory
✅ NEW - get your business listed and your information shared across social media.
Ad
Nigeria's s 2017 budget may have gone missing, Chairman of the Senate committee on appropriation, Danjuma Goje raised the alarm at Wednesday plenary.

Senator Goje claimed that the Nigerian police, last week, carted away laptops and documents that had the processed 2017 budget earlier scheduled to be laid yesterday.

He said the Police hijacked 2017 Budget during Invasion at his residence. 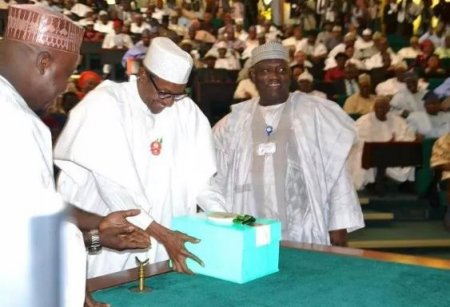 Recall that the police team had after the raid on Thursday recovered $19,000 4,000 Saudi riyals and N18 million in cash, the lawmaker’s aides confirmed, arguing the money was legitimate income.

They also allegedly carted away about 18 files and other documents related to the senator’s work at the National Assembly.
O

.to be tinkered and return back padded.
M

These people are bunches of jok
F

okolie amaka said:
Won't be surprised when you wake up and discover that Nigeria itself is missing
Click to expand...

I will not be missing with you ooo