The Economic and Financial Crimes Commission (EFCC) has agreed to send fresh evidence against the former Chairman of Daar Communications and Investment PLC, Raymond Dokpesi, who was re-arraigned over alleged corruption.

Dokpesi was on February 17 re-arraigned before Justice James Tsoho on a six-count charge after the case was transferred from Justice Gabriel Kolawole where he was earlier arraigned in December, 2015.

At the resumed hearing yesterday, defence counsels Wole Olanipekun, Mike Ozekhome, and Dayo Akinlaja, all Senior Advocates of Nigeria, complained that the proof-of-evidence attached to the charges against Dokpesi were not legible. 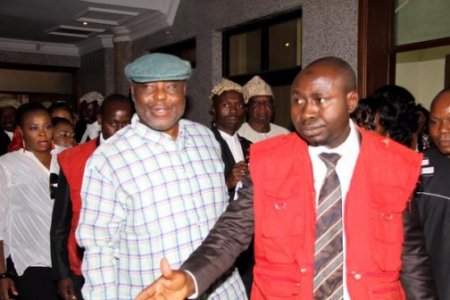 EFCC counsel, Rotimi Jacobs (SAN), apologized for the poor print of the documents and promised to serve better copies to the defence team. Consequently, Justice Tsoho adjourned the case to March 28 and 29 for hearing.