FREE Nigerian Business Directory
✅ NEW - get your business listed and your information shared across social media.
Ad
The management of Leadership Holdings Limited, publishers of Leadership newspapers, has returned the N9m it received from the office of former National Security Adviser through the Newspapers Proprietors Association of Nigeria as compensation for the seizure of its publications in June 2014.

In a letter dated January 29 and addressed to the General Secretary of NPAN, the Publishing company owned by former APC Presidential aspirant, Sam Nda-Isaiah, said it decided to return the money following the controversy it has generated. 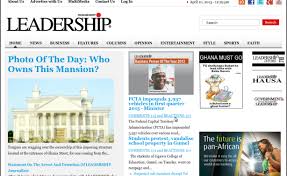 The company however noted that they did no wrong by collecting the money since the decision to collect the money was reached after former President Goodluck Jonathan reached for an out of court settlement with the affected newspapers.

Leadership will be the third publishing house after The Sun and The Nation to return the said compensation.
You must log in or register to reply here.