Victor Umeh, National Chairman of the All Progressives Grand Alliance (APGA), Victor Umeh, said that former Governor of Anambra State, Peter Obi, resigned his position as Chairman of Board of Trustees (BoT) because he was expecting to be appointed minister by the Federal Government.

DAILY INDEPENDENT reported that speaking to newsmen at Aguleri where the Catholic Bishop of Abuja, Cardinal John Onaiyekan, presided over a high mass on the invitation of Anambra State Governor, Willie Obiano, Umeh who appeared visibly angry at Obi's defection said, "it is very wrong and very unfair that the leadership that stood behind him through his travails, including getting him elected as Governor, and having failed to do the needful and pursued other things and did not succeed to send us a letter of resignation blaming the leadership of failing to ratify his position".

However, Umeh reiterated the APGA's support for President Goodluck Jonathan come 2015 elections. He said that APGA has formed its own Jonathan campaign wing known as ‘Join Jonathan Journey’, which will be launched on Tuesday.

He however called for a proper alliance between the PDP and APGA. 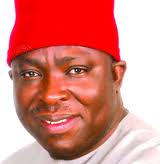