Politics Presidency Explains Why Buhari’s Foreign Trips Are Not Jamboree

FREE Nigerian Business Directory
✅ NEW - get your business listed and your information shared across social media.
Ad
Presidency, on Monday, explained that the foreign trips of President Muhammadu Buhari so far were not a jamboree.

It declared that the trips were for the good of the country which would in less than no time manifest.

Speaking on the issue, the Senior Special Assistant to the President on media and publicity, Mallam Garba Shehu in Abuja stated that trips had stated paying off as president Buhari has succeeded in blocking many loopholes through which funds were looted. 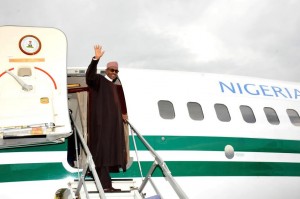 According to him, the president has signed a couple of agreements that would lead to repatriation of looted funds.

It will be recalled that the president since assuming office May 29, last year has embarked on various international journeys which had seemingly attracted unhealthy reactions from some Nigerians.
You must log in or register to reply here.

E
Politics Garba Shehu: It’s not wrong to have a cabal at the presidency - The cable