Engineering Students of the Rivers State Polytechnic are on riot over the alleged killing of their colleague by unknown gunmen, a report from Liveschoolnews.com.ng says.

However, another unconfirmed report said everything started yesterday when a student objected to actions of election officers during an election campus and was beaten to a state of coma under the watch of the Chief Security Officer.

He was reportedly rushed to the hospital thereafter.

Other students in the campus needed to know his whereabouts, whether he was dead or alive but the CSO was adamant to grant their request so he (CSO) reportedly ended up receiving the beating of his life.

Eye witnesses said the student went ahead to protest and vandalize school properties including the C.S.O's office and ICT centre.

They also set the office of the Rector on fire, LiveSchoolNews added.

The police have been involved and students are reportedly fleeing the Campus. 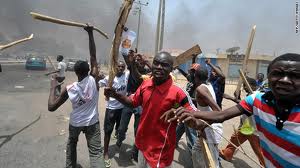