For Sale - One Bedroom Executive Flat - Lagos (NGN37m)
✅ NEW - car park, swimming pool, 24 hours light/security and more.
Ad
Lagos State government has received $200m loan request following the deliberation of the report of Ad-hoc Committee on Foreign and Local debt to which the request was referred a fortnight ago to the Senate

Senator Kabiru Gaya (APC Kano South), in a motion for the consideration of the report, had said: “That the Senate do consider the Report of Ad-Commiittee on Local and Foreign Debts for Special approval of Lagos State Development Policy Operation (DPO) loan budget support of US$200 Million from the World Bank”. 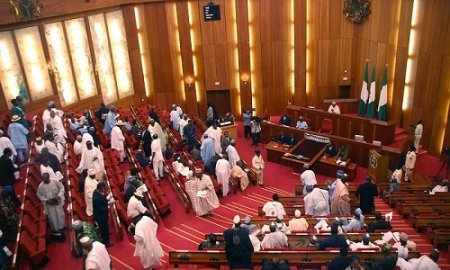 Supported by Senator Remi Tinubu (APC Lagos), Gaya explained that the loan would go a long way developing the state’s infrastructure and in generating jobs for the teeming unemployed in Lagos State.

After the deliberations, the Senate President, Bukola Saraki put the request to a voice vote wherein the ‘ayes’ had it

Politics I Deserve to be Principal Officer in 9th Senate, Says Tinubu – Thisdaylive