On Tinubu, Okupe said, the former Lagos Governor had conquered the South-West and was out to expand his empire.

"Like Napoleon and others who were on expedition, they want to expand their frontiers. He wants to come to the national stage and expand his business empire"

Adressing Former FCT Minister, El-Rufai's incessant criticism of President Jonathan, Okupe said Nigerians should not take him serious because “he is under excruciating pain that he is not in government.”

"If I castigate him, I am doubly qualified to do so. I am his brother and we have very strong family ties that dates back over 21 years. When we were in Lagos, if we were eating inside with his senior brother Bashir, El-Rufai will sit outside.

"So I am not his friend, he is my younger brother and I am in a position, going by the African way, I have the moral right, I have the age, I have the knowledge, I have the experience, I have the position to tell El-Rufai that he is wrong and I am saying it on this medium that El-Rufai must check his ways".

The Presidential aide also spared a moment to blast Rivers state Governor. Okupe described Amaechi as a willing tool, "very rich, wealthy, so he is very useful to the opposition". 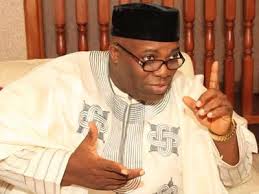 K
Politics Ortom is not someone I take very seriously, he is using the Federal Government as a punching bag to distract attention from his failures – El-Rufai...

May 9, 2021
Kayode Israel
K
E
Politics Jonathan continued the persecution that Yar’adua started, he was convinced by his circle that I was a threat and he had to take me out - El-Rufai - LI