Top 10 Exciting Festivals You Should Not Miss In Edo State 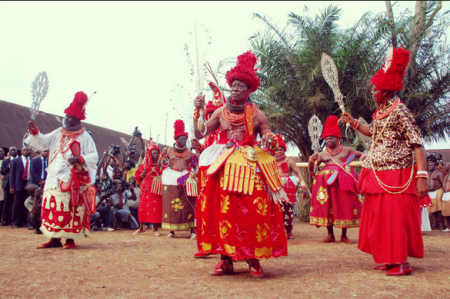 Some of the festival celebrated in Benin/Edo State include:

Igue and Ewere festivals which are perhaps the most colourful and crowd- pulling festivals in among the Benins are combination of various festivals. They are reminiscent of the past events in Benin history. Each of the events is connected with past Obas around whom Benin customs and traditions are woven. The Igue festival is celebrated annually by every reigning Oba and all Benin citizens at home and abroad to mark the end of the Bini year and to usher in a new one with renewed hope for peace and prosperity. The ancient Igue festival is akin to the white man’s New Year ceremony. Before the innovations introduced by Oba Akenzua II Igue was normally celebrated during the month of September to climax a series of ceremonies, including Ugiododua, Ikpoleki, Rhor, Ugioro, Ugi’ gun or Isiokuo and Ihiekhu.

Cows, goats, fowls and other beasts are prodigiously slaughtered to propitiate the spirits of the departed Obas and the various gods of the people.
Before the European era, the number of human beings slaughtered during this period of the year approximated in quantitative terms to that of the lesser animals. In those days, most of the ceremonies were held at night, a situation which made the lives of the ordinary citizens most insecure.

Like Igue and Ewere festivals Eho is one of the popularly cherished festivals celebrated in Edoland it is an annual festival celebrated in mid-September. It dates back to pre-historical period and is occasions for paying homage to ancestors in every family unit; a period for cementing the unity of all brethren in the family fold and an occasion in which gifts are sent to fathers-in law.

Besides paying homage, the Binis believe that all who die hold meeting and appoint a time for answering prayer and soliciting for their children on earth before a more Supreme Being who they call Osa. This is why Eho festival is celebrated at various homes within a given period which lasts from nine days to two weeks.

On the advent of new moon in September, Chief Iyase, the leader of Eghaeybo None (state ministers) tells the Oba that it is time for Eho festival. On the Oba’s consents, he goes to prepare, Chief Iyase is always the first among the state ministers to celebrate it while Chief Ihaza is the first to celebrate it among the Eghaevbo-nogbe (palace ministers) it is after these two that other chiefs and commoners can celebrate.

Commoners sacrifice cocks, the chief’s cows during the celebration. But kola-nuts cocoa-nuts and assorted types of wines are lavishly used irrespective of the celebrant’s status in life. The rich and the well-to-do- also invite old women to their homes to sing traditional songs.

Ebomisi a contracted form of Obo- imwen-isi (the herbalist has no permanent station) Is celebrated annually between February and March in commemoration of a famous herbalist and magician.

The festival is celebrated for five days at various dates in the villages forming Ugo clan in Akugbe District of Benin. These are Ugoneki, Ugonoba, Ugo-Emoson, Okuekpen Okogo and Ugbayon.
Ebomisi hailed from Uwan on the Benin /Ifon road and was farming at a place later named after him .The town is today called Ugbogiobo (the chief herbalist‘s farm).

The date for the commencement of the festivals is fixed at a meeting of the elders including the high priest of Ebomisi after consulting oracle and necessary preparations made. Most of the festival is celebrated at the shrine and masquerades, usually seven in number, visit the village occasionally to dance and pray for peace, good health and prosperity among the entire sons and daughters of Ugo at home and abroad. It is only during these visits to town that women dance and take part in the ceremony.

All sons and daughters of Ugo visit home at the time of this festival to receive blessings from Ebomisi- the men from the shrine and women from the masquerades. Beside festivity which takes place in April at Ugoneki. This is called Isosun.

Ohonmoimen in the local language means ‘it is all well for me’. As the name implies Ohonmoimen festival is celebrated annually between January and March by Iuleha clan in Owan to mark the end of a fruitful year and the beginning of another. It offers opportunity for expressing gratitude to God, through ancestral gods and the gods of harvest for all the good things of the past. Prayers are also offer for protection and fruitful harvest in the coming year.

The rituals associated with Ohomoimen festival are carried out it three place know as sacred forests in the clan. These are OSEZE forest near okhijo village where the elders meet and appoint a time for the festival; OHIOJO forest and OSI forest where the images, drums and other appurtenances of the masqueraders are kept. The forest is out of bounds both for women and males not yet initiated.

Citizen within a particular age group are initiated every five years and these watch the forests during the festival. On announcement that a date has been fixed for the sacred forests harvest palm-nuts and from these nuts palm oil is made for the ceremonial lamps. The forest are also cleared and kept clean.

A curfew is imposed in the clan on the eve of the festival to allow the celebrants to convey materials to the sacred forests. That also stands as the last time people in the clan are allowed to climb palm tree and sing song other than festival songs. No light is to be seen outside during the curfew except when a pregnant woman is under labour when this does happen the family pays a fine of a she-goat.

In Etsako there are several traditional festival which the people celebrate annually or biennially to commemorate certain historical events of cultural importance. Some of them are celebrated to mark the beginning and the end of the local seasons.

The Adu-Ikukun festival is celebrated by the people of Avianwu clan of Etsako. The clan consists of Fugar. Irakhor, Ogbona, Iviarun and Ivinone villages and to them the festival is of great significance. It is celebrated during the months of February and March to signify the start of the year.

As soon as the festival occasion draws near the various villages in Avianwu begin to organize ‘clean up campaigns’. The English translation of Adu-Ikukua is to (throw away dirty) hence a clean- up campaign of all the surrounding in the area is organized.

As the name implies Ukpe (year) is celebrated in June by all the villages comprising Ewohiwi to mark the end of one year and the beginning of another. Homage is paid to ancestors to express gratitude to them for protecting the people throughout the year.

The festival is for a four day duration and held separately by the various village-firstly by Idumuagbor and lastly by Ikeken. The celebration features entertainment, service at the ancestral shrines, exchange of gift and traditional dancing.

The festival ends on a market day when everybody appears gorgeously and dances to the market- place in Ewohimi.

Ighele festival is one of the most important festivals in Ishanland . It is celebrated annually in Ewu in the month of June and is significant to the inhabitant of Ewu because of the belief that Ighele brings peace and prosperity. Beside this idea, the festival appeases the ancestors of Ewa.

About a week to the festival the area which encloses the shrine is cleared and well decorated in the traditional norm of Ighele. The festival begins with gorgeous dressing. Young girls and adults appear in their best. The wearing of gold trinkets is commonplace and those who can afford coral beads also put them on, this young girl in company of the adult women dance round the town.

As the name implies, Oto-Uromi (Uromi land) is celebrated for a day in July or early August to appease the land of Uromi so as to produce good harvest. It is always held on an Uromi market day, always fived by the Onojie of Uromi acting on the advice of the elders and chiefs. An interval of 15 days is always given between the announcement and the date of celebration to allow for preparation.

It is a customary law that nobody goes to the farm on the day of celebration. Although the entire people of Uromi are involved in it, people from Umuwazi village called Egbele-Iwienbolo and Ikekiala, play a great role.
The ceremony is performed by Iwienbola people on a chosen spot where four sticks of chalk, four kola-nuts, some cowries, ripe pumpkin and a dog are used in appeasing the soil.

Like other festival celebrated in various parts of Edo state. Ivbamen is celebrated annually for a week in April or May by Ozalla clan in Owan to initiate young men between 28 and 30 years of age into manhood. It also marks the end of one year and the beginning of another. The festival is as old as Ozalla clan itself. Each celebrant participates in it for three consecutive times so that by the time a man of 28 reaches 30, he must have completed the full turn. No young man is allowed to participate in the festival less than twice and if any celebrant dies after performing the ceremony only once, for instance, it is regarded as bad luck for the person.

The date of ceremony is announced five market days earlier by the clan head with the co-operation of the chief priest of river Orhuen. The celebrants then start physical training to enable them run the eight-mile distance from the town to river Orhuen. They also make public announcements about their intention to participate in the festival and promise to bring to the elders information about any obstruction that comes their way.

Oriminyan is celebrated at Ogute-Evbiame in Emai Clan for three months (January- March), and in some parts of Ora and Iuleha. Although the festival is celebrated annually, a new age group is initiated every fourth year. It is celebrated to ensure peace and plenty in the town. The main features are masquerade dance in the evening at the centre of the town and merriment every five days and young men participate in the events. The masquerades wear marks and image and people regard them as heavenly spirits and not man-made.

The uninitiated is not allowed to come out at night on the first day of the festival when the masquerades parade the town and make awful sound. Women are also forbidden from seeing the enclave where the masquerades are clothed. Dances are held every five days- the market day during the three- month period. When an age group of 25 to 30 years is admitted into the village society as reaching maturity the women of that age group join the men in public festivities. It is usually an expensive undertaking.