Trump first made the claim in an interview with CNN, then continued the strong criticism during a 95-minute rant at an Iowa rally. 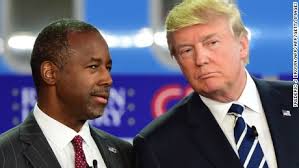 He said he didn't believe Carson's story about his religious awakening in his bathroom, either, and questioned the retired neurosurgeon's tale about nearly stabbing a friend.

Trump imitated the incident, moving his belt up and down to demonstrate how difficult it would be to strike the buckle instead of flesh, and bellowed moments later, 'How stupid are the people of Iowa?'

'How stupid are the people of this country to believe this crap?' Trump said during the campaign event at Iowa Central Community College.