Victor Moses is a professional footballer who plays as a wing back for Premier League club Chelsea and the Nigeria national team.

Born in Nigeria, Moses represented England at under-16, under-17, under-19and under-21 levels, but opted to play for Nigeria as opposed to being fully capped for England. He has gained over 20 caps for Nigeria since his debut in 2012, and played in their winning campaign at the 2013 Africa Cup of Nations, as well as the 2014 FIFA World Cup.

He has been in devastating form these past weeks. He scored two goals against Algeria in a World Cup qualifier match.

Victor Moses has been voted the Nigerian Bulletin Personality of the Week. Congratulations to him. 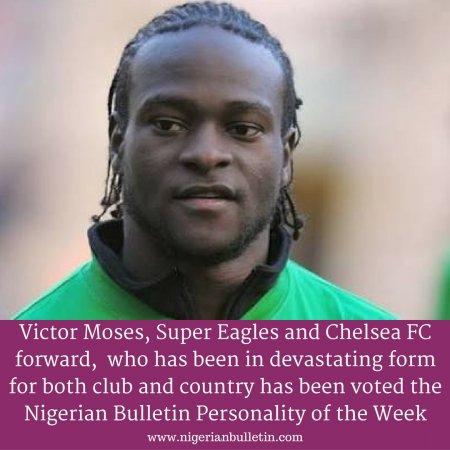