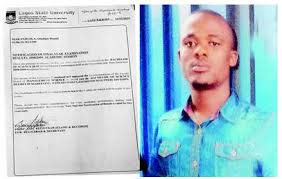 The police said Makanjuola had paraded himself as a degree holder in marketing with Second Class, Upper Division, a forged National Youth Service Corps discharge certificate and a reference letter to the bank. He claimed to have obtained the letter from United Bank for Africa, his purported former workplace before his arrest.

He said, “I am actually a National Diploma holder. I secured the fake WASCE and LASU results, using a search engine and CorelDraw application. I scanned an NYSC certificate and used some applications to edit it. I did it in order to put an end to the suffering of my poor family. I am the only son of my father. I want the authority to be compassionate with my case. I was only trying to live a better life.”

A police prosecutor, Inspector I. Okeke, arraigned Makanjuola at a Tinubu Magistrate’s Court on three counts of forgery.

The accused pleaded not guilty to the charges before the presiding magistrate, Mr. A. Adefulire.