Curators
FREE Nigerian Business Directory
✅ NEW - get your business listed and your information shared across social media.
Ad
The 58-year-old woman who attempted suicide by trying to jump off the 3rd mainland bridge has been arraigned to court and granted N500,000 bail. 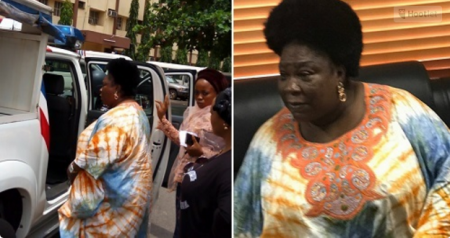 Recall, The woman was on March 24 rescued from jumping off the Third Mainland Bridge into the Lagoon by operatives of the Rapid Response Squad (RRS) of the Lagos State Police Command.

Effect of bad economy.
B

Was her intention of trying suicide obtained?
B

Unbind her and let her go joor

Woman u can't commit suicide. We're all suffering in Nigeria together.. U can't come and be trying to escape the suffering. That's very disloyal
P

God have saved you
C

Azeez Kehinde Adeshola said:
Woman u can't commit suicide. We're all suffering in Nigeria together.. U can't come and be trying to escape the suffering. That's very disloyal
Click to expand...

Lol...we must finish it together abii
C

It's not easy anywhere oo. Even for the place she tried to go to

Metro Daibo Davies, man who jumped into Lagoon was not a LASU graduate – Pulse Nigeria