Curators
FREE Nigerian Business Directory
✅ NEW - get your business listed and your information shared across social media.
Ad
Three suspected female suicide bombers were killed while attempting to attack a military outpost near Muna garage at the outskirt of Maiduguri in Borno State, the National Emergency Management Agency (NEMA) has said. 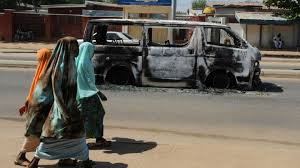 Malam Abdulkadir Ibrahim, NEMA North-East Information Officer, said in a statement issued in Maiduguri that the incident occurred on Wednesday.

“They were sighted trying to gain access to the premises and were shot by the security agents on guard leading to the detonation of their concealed explosives.”

“All the three of them were killed in the explosion. A security personnel was also injured,” Ibrahim said. The Information Officer said that the remains of the bombers had been evacuated by aids workers.

“The corpses were evacuated to Borno Specialist Hospital by NEMA and officials of the State Emergency Response team,” he said.