The incident occurred around 4:50am while the siblings were sleeping in the three-bedroom bungalow.

Spokesperson, Lagos State Emergency Management Agency, LASEMA, Michael Kehinde says a mound slide washed down by rain in the early morning rain led to the collapse of the apartment located at No. 50 Otun Araromi Street, Orisa, Magodo, behind Magodo Phase 1 at about 4:50 am today. 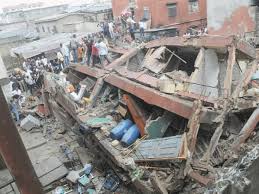 He said the collapse buried four children who were later brought out of the ruins dead, while the father of the children, Godwin Odia, 50, from Edo State escaped death as he was out of the house few minutes before the tragedy struck.

“All the children are of Mr. Godwin Odia, 50 year old man from Edo State,” says Akindele, who is the General Manager, LASEMA.

“The four dead bodies were recovered after digging through the sand. Another slide occurred six houses away from the incident site about 10.05am on another bungalow, but the occupant ran out immediately for safety,” Akindele revealed.

He said arrangement was on to release the deceased to the Odia family or to the State Environmental Health Monitoring Unit, SEHMU, as at the time of filing this report.

According to Akindele, the agency had been engaging in advocacy for people living in flood-prone areas to relocate to avert more disasters, just like the collapsed building which is located in a valley prone to flood.

However, following the collapsed occasion by the mound slide, officials of the Lagos State Building Control Agency, LASBCA, have marked about 10 houses in the area for demolition in order to avert another disaster.