If he leaves at Arsenal manager at the end of this season at least the “specialist in failure” will have ended that horrible statistic against The self-styled “Special One”.

Wenger will also have taken delight at ending United’s 25-match unbeaten run in the Premier League and, maybe, rekindling Arsenal’s outside hopes that they might finish in the top four and qualify for the Champions League. 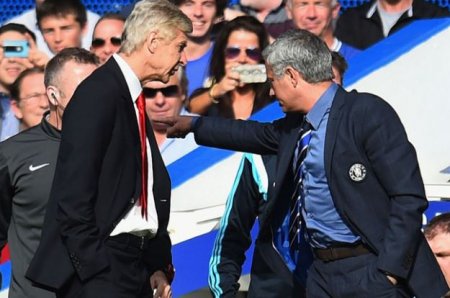 Mourinho will point to the eight changes he made after the Europa League semi-final victory over Celta Vigo, with the second leg to come this Thursday, and the competition representing United’s best chance of reaching the Champions League, but his team was hugely disappointing in a game that – frankly - felt like a skirmish between also-rans.

Wenger had beaten Mourinho before but only in the Community Shield with second-half goals from Granit Xhaka and Danny Welbeck – scoring for the third successive match against his former club – giving Arsenal their unassailable advantage here.
A

It was really a game to watch though
D

LoL. Big time. His approach towards the game was all wrong. Too much negative tactics.

Why approach a weak opponent with so much caution and trepidation? Arsenal grew in confidence as the game wore on and Man Utd didn't. It was only a matter of time before they scored.

It was an eyesore. And it's all Mourinho's fault.