Metro Distraction of EFCC is a Criminal Act – Wole Soyinka

Curators
FREE Nigerian Business Directory
✅ NEW - get your business listed and your information shared across social media.
Ad
Nigeria’s Nobel laureate, Prof. Wole Soyinka, on Saturday in Lagos, called for the prosecution of those he described as “detractors” in the fight against corruption in the country. 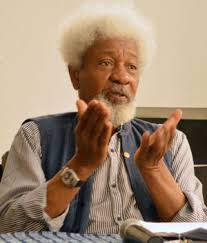 Soyinka made the call at the opening of his Vision of the Child Art Exhibition, 2017 edition, at Freedom Park, Lagos with the theme: Enhance the Heritage, Advance the Future, in celebration of Lagos at 50.

He said that most times, the anti-corruption agency was sent on the wrong track or wild goose chase, resulting to no prosecution.

“When we talk about corruption, is it not time we legislate against detractors, who deliberately create distraction. Say for instance, the money just found in Lagos.

‘‘One governor claimed that the money belongs to his state government, claiming a proceed from the sale of some turbines and so on.

‘‘It is a criminal act of distraction. He knew very well that he was lying, that the money was not his, but belongs to someone else.

‘‘Obviously, acting in the interest of those accused of corruption that to me is connivance and collaboration with corrupt people.a

‘‘I think such people should be criminalised by the Economic and Financial Crimes Commission (EFCC),” he said.
A

You have a big point sir
D

Dec 10, 2019
ese
E
E
Metro BREAKING: Police seal off Lagos venue where Soyinka is to speak on insecurity - THE CABLE

Metro I Am Done With Honorary Awards – Soyinka – Nairaland