According to an official of the investigating team of Nigeria Army said the family of a fleeing Boko Haram kingpin arrested during raid on the terrorists camp in Borno state are currently co-operating by giving useful information.

Troops of the 115 Task Force Battalion under 7 Brigade Multinational Joint Task Force (MNJTF) had during a patrol and raid of Boko Haram terrorists hideout arrested a female suspected to be wife of the Boko Haram leader after her husband took to his heels amidst shoot-out. 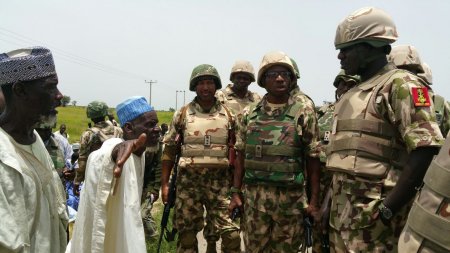 The woman was caught with four children she had for the unnamed Boko Haram kingpin.

It has been established that most Boko Haram Amirs were allowed to move around with their family.

Spokesman of the 7 Division Nigeria Army, Colonel Tukur Gusau, who made this information public in a statement, said the arrest was along Kukawa and Nganzai local government areas of Borno State.

“The troops of 115 Task Force Battalion under 7 Brigade Multinational Joint Task Force (MNJTF) while on clearance patrol, along Baga and Gudunbali towns of Kukawa and Nganzai local government areas of Borno State, arrested five fleeing suspected Boko Haram terrorists and family of a Boko Haram terrorist who fled and abandon them due to military offensive.

“The family includes a woman and four children; who are currently being catered for and investigated in a military facility.”

Similarly, the troops of the 5 Brigade Nigerian Army, after clearing Boko Haram terrorist camps in Kerenowa, has also embarked on clearance of Improvised Explosive Devices (IEDs) buried along the road that links New Marte-Dogongida-Kerenowa in Borno State.

“The troops have also been working tirelessly to destroy all IED making facilities found in the area.