Politics "Ikuforiji is the Next Lagos Governor!" - Cries of Supporters

For Sale - One Bedroom Executive Flat - Lagos (NGN37m)
✅ NEW - car park, swimming pool, 24 hours light/security and more.
Ad
Speaker of the Lagos State House of Assembly, Adeyemi Ikuforiji who was acquitted and discharged and acquitted by Justice Ibrahim Buba of the Federal High Court, Lagos on Friday morning of money laundering charges will be the next governor of Lagos his joyous supporters claim.

The joyous Ikuforiji along with his supporters made a brief stop at the home of Asiwaju Bola Tinubu, a national leader of the All Progressives Congress in Ikoyi before heading to his office where he asked to be alone as he observed his prayers.

Shortly after his prayers, Ikuforiji returned to his rapturous supporters who sang “Victory at last, Victory at last….Welcome the Governor.” 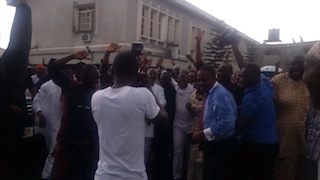 Sep 23, 2018
mrsam
M
L
Politics Gov Ayodele Fayose: I Am The Next President of Nigeria