Nigeria is an interesting country to be and to visit. There is so much to be proud of with respect to arts and culture. Drumming especially is a vital part of the cultural heritage of the Yoruba people of Southwestern Nigeria. Drums are used in special occasions, festivals, carnivals, ceremonies. They even add special effects and style to some bits of our culture. Drums are differentiated by the sound they make, how they are made, history, and appearance. For Yoruba people, ceremonies dictate the kind of drums to use. Here is a look at some of these important drums.

---
1. Gangan/ Dundun (Talking Drum): Gangan is also known as 'Talking drums' . It holds a special place in the tradition of the Yoruba people, and its use in Yoruba folklore cannot be overemphasized. Its origin can be traced to the Old Oyo Empire in South-West, Nigeria. It was introduced as a means of communication during inauguration of the Alaafin of Oyo. Talking Drums are used to imitate different tone and chant patterns of the Yoruba language. Its hourglass shape makes it possible for it to be held under the arm. It is made of adjustable cords. This cords can determine the pitch of the drum. If the cords and strings are pulled hard, the sound or tone from the drum would increase and if the chords are softly squeezed, the sound will be low. They are frequently used in modern churches, festivals, wedding ceremonies and carnivals. 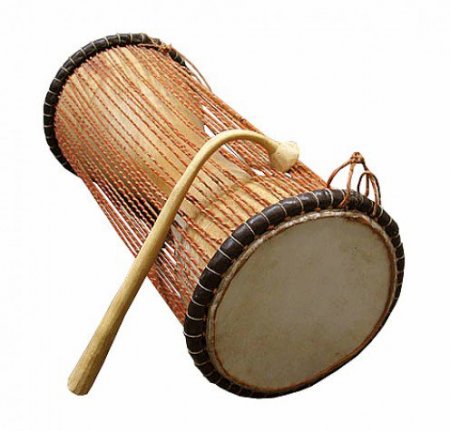 2. Bata: Bata is another important drum used by the Yoruba people, a double-headed drum shaped like an hourglass with one cone larger than the other. It’s used majorly in religious functions, festivals, carnivals and coronations. It’s also used to convey messages of hope, divination, praise and war.

A set of batá consists of three drums of different sizes. The drums are similar in shape to an hourglass and each drum has two different sized heads. The batá are played sitting down with the drum placed horizontally on the knees. This allows the drummer to play with both hands.

The Iyá ("Mother") is the largest drum and leads the group, playing long, complex patterns with many variations and initiates conversations with the other two drums. Iyá are often adorned with a garland of bells and bronze caps called "Chaworo" which enrich the vibrations and the timbre when the drummer plays the instrument. 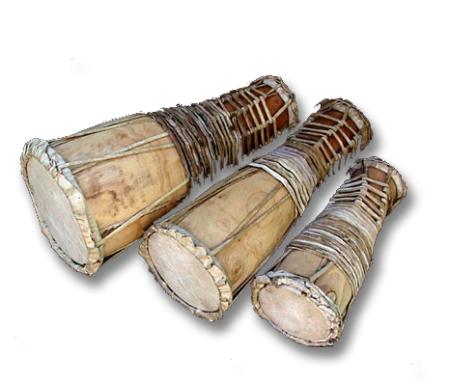 The Itótele is the middle-sized drum, playing long, but less complex patterns with some variations as well as answering and occasionally initiating conversations.

The Okónkolo is the smallest of the three playing short, simple patterns with occasional conversations and variations.

The Bata drum has different parts which include; “Igi Ilu”(wooden frame work), leather, “Egi ilu”(thick brooms for support), “Osan”(wire work), “Iro”(black substance placed on the drum surface), “Bulala”(drumstick made from leather), and cowries.

3. Omele ako: Fondly called 'Omele', it is known as the “Sakara”drum. It is a shallow drum with a circular body made with baked clay. Goat skin is used in making the heads of the drum while spaced pegs around its body are used for tuning. They are used during wedding ceremonies, traditional coronations and festivals. 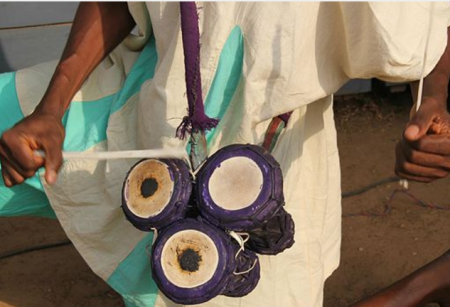 The Gbedu drum is said to have been brought to the Lagos area in the seventeenth century by Edo diplomats, symbolizing the hegemony of the Benin Empire Among the Yoruba, the Gbedu drum signifies royalty. 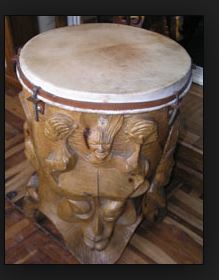 It is covered in carvings representing an image of a goddess, animals and birds. They are played by drummers using both their palms and drumsticks. It signifies royalty in the Yoruba land. In ceremonies such as the “Isagun rites”, the Oba might dance to the music from the drum and no one else is allowed to do the same.

5. Ashiko: Another important musical instrument among the Yoruba people, Ashiko is a tapered cylindrical shaped drum with its head on the wide end and its narrow end open. It’s usually made with hardwood and goatskin hide, played with the hands and tuned by ropes. They are mostly used in festivals and community celebrations. 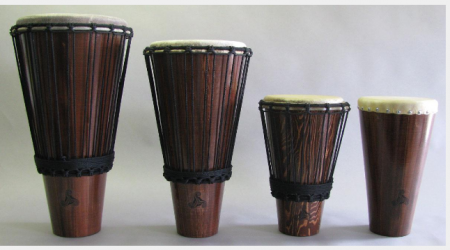 6. Saworoide: Saworoide also known as “Saworo”is a type of talking drum decorated with brass bells and chimes. Such bells are attached to leather straps for support. They are called “Chaworoide”and“Chaworo”in Cuba. 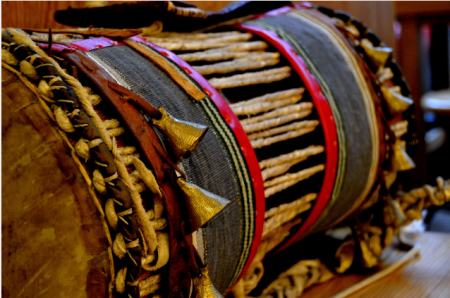 BEAUTIFUL. How can I buy the drums?