Barely two days after a pirate attack in Ogbia Brass Waterway on Sunday, another attack, involving a passenger boat, occurred in the area on Tuesday.

Lt.-Col. Mustapha Anka, spokesman of the JTF, told newsmen on Wednesday that the patrol team successfully repelled the two attacks.

Anka said that in the second incident, traders who were heading to the market in a wooden boat, were attacked in Nembe area of Bayelsa.

He said the troops also rescued the two women and children abandoned by the pirates in the first attack.

He explained that the victims were abandoned at Ijaw creek, near Brass Local Government Area and that efforts were being made to apprehend the pirates.

He further explained that one soldier sustained gunshot injury during an exchange of gunfire with the pirates in the second attack.

According to the JTF spokesman, the team has intensified patrols in the creeks and is also guarding passenger boats with a view to securing lives and property in coastal communities. 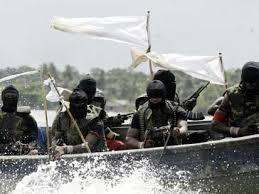