FREE Nigerian Business Directory
✅ NEW - get your business listed and your information shared across social media.
Ad
Justice Gabriel Kolawole of the Federal High Court, Abuja, has granted Raymond Dokpesi, founder of DAAR Communications Plc, bail in the sum N200m and two sureties in like sum. 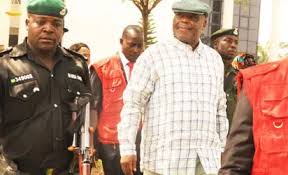 According to the judge, one of sureties must be a director in the civil service while the defendant must deposit his international passport with the court. The court further ruled that Dokpesi be kept at Kuje prison, Abuja, pending the perfection of the conditions of his bail. Kolawole faulted the argument of the prosecution led by Rotimi Jacobs (SAN) – who said Dokpesi was facing an indictable felony charge and should should be kept behind bars – against the bail application of Mike Ozekhome (SAN), Dokpesi’s lawyer, on the grounds that an accused person is presumed innocent until proven guilty.

The judge held that it was only in capital offences like murder that the court could deny granting bail to the accused person.