Casemiro put the league toppers in front by tapping into an empty net after the ball came off the woodwork.

Lionel Messi equalized after running a maze through Madrid's defense before Rakitic fired into the net with less than 10 minutes to go. Sergio Ramos was then shown a red card for a wild lunge.

Substitute James Rodriguez then made it 2-2 at the lat minutes of the game before Barcelona scored on a counter in added time, Messi slotting into the back of the net from the edge of the area.

Here are 7 reasons why Messi shone and Ronaldo didn't.

1. All goals deserved. Messi is a fantastic player. He was a thorn in the flesh of the Blancos and was the reason for Captain Sergio Ramos' red cad and Casemiro's substitution.

2. Madrid couldn't deal with Messi. They allowed him too much space. There was no one marking him nor tracking his movement for his second goal. 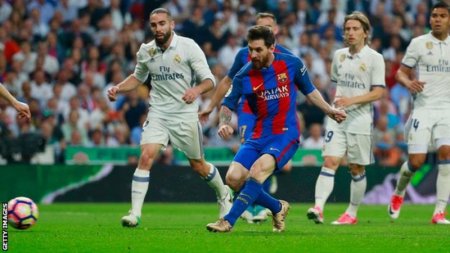 3. Ronaldo, though a fantastic player as well, was overzealous. He tried to force things too much.

4. Ronaldo was cut off by Barcelona's defence. After the first 15 minutes or so when he squandered a couple of chances, he hardly saw the ball.

6. The loss of Gareth Bale to injury and Sergio Ramos' sending off

7. Madrid committed too much men forward after their second goal. Despite being a man-down, they went all out for the winner and lost the match on a counter.

Barcelona now top the La Liga table although Madrid have a game in hand. Messi -- the greatest player to have ever lived! Respect!!! #Messi500