Security operatives at the Supreme Court, on Monday, engaged in a free-for-all fight, after persons in the entourage of Governor Yahaya Bello, were denied entry into the hall where 29 new Senior Advocates of Nigeria, SANs, were being sworn-in by the Chief Justice of Nigeria, CJN, Justice Walter Onnoghen.

A plain clothed policeman that accompanied the governor to the apex court main door was manhandled, with button on his shirt torn by the security operatives that comprised of both the Police and officers from a private security firm- Halogen. 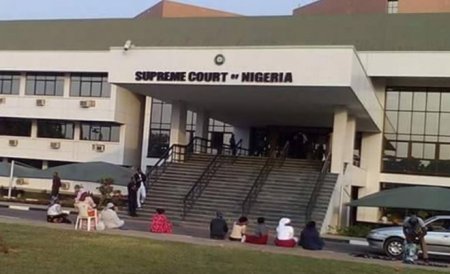 Governor Bello, who was temporarily delayed at the door, had already entered inside the apex court when the fight that led to smashing of a camera belonging to a photojournalist, broke out.

Aside his supporters, equally locked out by the operatives included some Judges and SANs that were already at the apex court by 9:30am for the event that commenced at exactly 10am.