The protesters insist that the Amnesty International must leave Nigeria.

Addressing the protest in front of the AI’s office, the executive Director of Global Peace and Life Rescue Initiative ( GOPRI), Melvin Ejeh said amnesty has until 12 midnight today to vacate Nigeria, adding that beginning from Thursday, legal actions will be taken against the organisation.

He described as laughable recent report by Amnesty International that it doesn’t recognize or react to NGOs not registered with it as the height of AI’s penchant for trivialities and a fact that the international NGO does not believe in what it preaches.

Ejeh challenged Amnesty International to disclose its affiliation with Boko Haram for the world to know when and where it registered Boko Haram that the killers have become their partners.

According to him, his organization will not be cowed by name calling by Amnesty International or its affiliates in Nigeria who derive pleasure in the killings of Nigerians by Boko Haram but Would continue to hold its sit-in until every force fighting the Nigerian people is demolished and demobilized.

See photo of the coffin below: 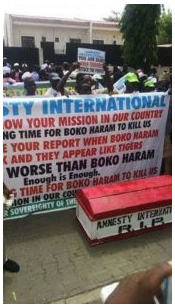