Durable luxurious Sideboard in Maple Wood - ₦150k (made to order)
Maple Wood with 3 drawers and 2 doors
Ad
Amnesty International rights organisation, Amnesty International has called on the Federal Government to give priority to the speedy rehabilitation and counselling of the 82 Chibok schoolgirls recently released from Boko Haram captivity. 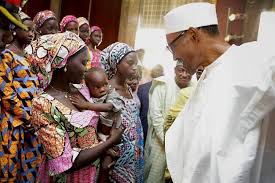 The organisation made the recommendation in a statement issued by its Nigerian director, Osai Ojigho on Sunday.

He said the privacy of the girls should not be compromised and adequate physical and psychosocial counselling and support should be granted them.

Osai said: “The release of 82 of the kidnapped Chibok schoolgirls by the armed group Boko Haram is a big relief. However, it is vital now that they receive adequate physical and psychosocial counselling and support so that they can fully reintegrate in their communities.

“The government should also respect their privacy and ensure that the released girls are reunited with their families and not kept in lengthy detention and security screening which can only add to their suffering and plight.

“Boko Haram members have executed and tortured thousands of civilians and raped and forced into marriage girls and women. They have been indoctrinated and even forced to fight for Boko Haram.

“The Nigerian authorities must now do more to ensure the safe return of the thousands of women and girls, as well as men and boys abducted by Boko Haram.”
E

They deserve the best seriously
C

You are right
U

they will definitely do that without delay.
R

Hmmmmmmm
You must log in or register to reply here.