Abubakar said this in an interview with newsmen shortly after a routine visit to troops in Betta, near Sambisa forest.

He said the military had recorded lots of successes in its anti terrorism campaign, adding: “We have achieved a lot and we are still doing much, but you know that the job is still there until we finish it. We are very close to Sambisa, we must enter and capture the forest before the Presidential deadline.” 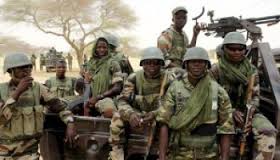 He said the main target was to end terrorism and terrorists activities in the country. “Our major concern is that we must fight Boko Haram to a standstill and ensure that we eliminate them,” he said.

The theatre commander expressed happiness with the troops’ performance, so far, noting: “I am happy that we are progressing very well, we have not reached the promised land but we are making progress. We are making efforts to clear all Boko Haram terrorists camps.”

Abubakar said a number of Boko Haram terrorists had been taken into custody after they surrendered their weapons. “For those surrendering we have shown all the human side of the military to them, we are receiving them and some of them are very impressed by what they are seeing.

“We are screening and de-radicalising them for eventual re-integration back to society.”

Abubakar said his visit was aimed at boosting troops’ morale at the frontline in the fight against terrorism. “My visit was based on a directive by the Chief of Army Staff (COAS) that we must be close to our troops.

“We must be able to know what they are doing, guide them, look at their challenges, move with them and encourage them to fight the war. When I addressed the officers that was exactly the message I gave them.”

Abubakar said that Betta town was strategic to the military because of its proximity to the Sambisa enclave of the Boko Haram terrorists.

He said: “Betta is very strategic, because a few months back it was in the hands of terrorists, but we cleared and dominated the place, it is one of those areas liberated.

“If you look closely, the distance between Betta, Yamtaki, Sambisa and other villages which are Boko Haram enclaves is short, for us to be here means we have done lots of job. We are using the place as a launching ground for attack.”