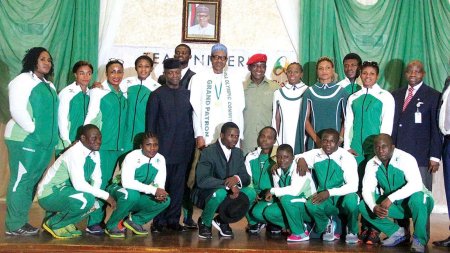 Donating the money, Ogochukwu Ekezie-Ekaiden, the Head, Corporate Communications of Union Bank, said that the money was for both the athletes and NOC.

Ekezie-Ekaiden said that N25 million was for the athletes and N5 million for the NOC’s logistics for the Games.

In similar fashion, the captain of Team Nigeria for Rio Olympics, John Obi Mikel has donated $30,000 to the team.

The 29-year-old Super Eagles veteran, who has been selected as one of the overage players in the Under-23 football squad, has been named captain of the Nigeria team for the Rio Olympics.

A member of the team said: “Mikel has donated $30,000 to the team. You know we have not received money since we left Nigeria.”

Curators
No money yet from Nigeria''s social media billionaires? Big thank you to Mikel and Union Bank

E
Sports We will shine like stars at Winter Olympics, Bobsled team assures – The Guardian Nigeria...